The Forbidden Fortress of Forbideness

*In the writer's office, the writers stare nervously, at the two cops, both of which are holding out their badges with one hand, and holding an M-16 (from SS3) in their holster with their other hand. Despite the fact that the police were indoors, Dark sunglasses rest upon their sharp noses, sending the message: "I'm Law Enforcement, and therefore, I'm cooler than you."*

Bob the writer: Don't tell me that we have two MORE writers!

Police office #1: I truly wish it was that simple for your sakes. You seem to have yourself trapped. You've been on the run for many years... but we've finally caught you.

Geb: What the heck are you talking about?

Police officer #1: I'm Officer Kedri, and this is my sidekick, Aglar. We are part of the elite crack Hacker/Emulator Massassian Police squad.

Aglar: And I'm afraid one of you has been hacking.

Bob the writer: Hacking? We couldn't hack ourselves out of wet paper bag.

Sem the writer: Well, I could. But when did we alledgely Hack?

Officer Kedri: Three hundred and Seventeen counts of hacking, to be exact.

Poster Geb: This is religious discrimination!

Geb the writer: I agree with my namesake. Who, exactly, is the one doing all of this hacking?

Officer Kedri: The Otter. And we'll be needing him to come with us.

Geb: Ha! That's where you've made your mistake. Otter, right now, is under the sanctuary of the God of war.

*The two policemen stumble past eachother, dive over the puke-green couch, slide on the Coffee table, and tackle and pin down theOtter. They quickly frisk him for computer cables*

Officer Kedri: You have the right to remain DeVoiced, everything you say and/or type can and/or will be used agains-

Otter: I swear! It wasn't me! The real hacker has the same I.P. address as me!

Officer Kedri: Oh, sure, that's an NEW one!

Aglar: Yeah, about as new as the ol' the Dog ate my T-1 line excuse!

*Kedri handcuffs Otter and drags him from the room*

Officer Kedri: And this time, you can't use the phone!

*The door slams with a thud of finality, and a siren screams away, finally quieting into nothingness* 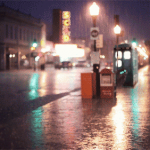